Born in England in 1951, Richard derives his artistic lineage from the great artists of the Heidelberg School.  Having always enjoyed painting and drawing, he studied commercial art and worked in advertising for a number of years before taking up painting on a full time basis in 1978. His paintings are traditional impressionistic landscapes and seascapes which often feature young children and romantic figures from an era long since past. Richard paints mainly in oils.

Richard has exhibited in many group and solo exhibitions, all of which have been very successful. In 2001 Richard was commissioned to paint 10 panels depicting life around the Macedon Ranges. 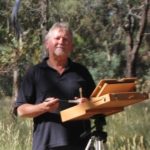